Conventional television is transmitted with a temporal resolution of 25 frames per second or 50 fields per second if interlacing is used. With the advent of Ultra High Definition Television (UHDTV) spatial resolutions will increase and so will inevitably do temporal ones. High Frame Rate (HFR) will improve the motion portrayal and ultimately provide sharper images thus increasing the quality of experience for audiences. Current UHDTV receivers support a frame rate of up to 50 frames per second while for sports content a frame rate of 100 fps is preferable. In fact, content with fast motion such as sports may suffer by motion blur when displayed at low frame rates (e.g. 25 fps) as illustrated in the image below. 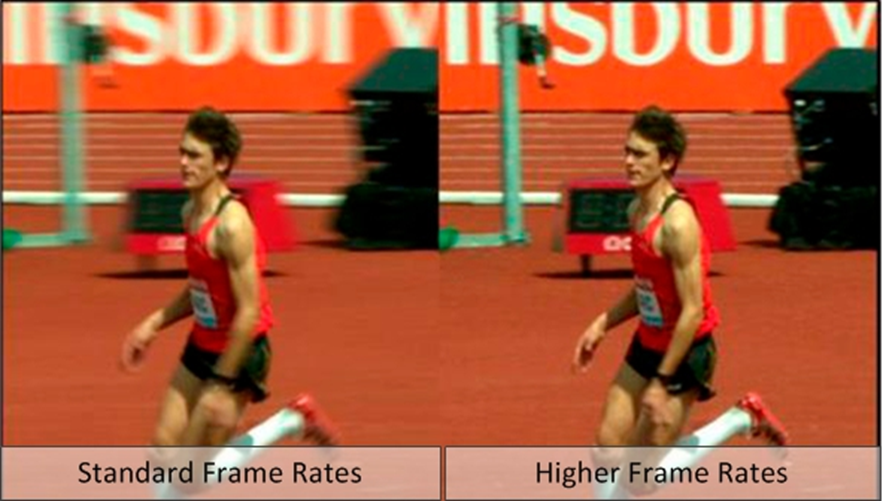 By increasing the temporal resolution, more data will need to be compressed. It should be noted however, that doubling the frame rate doesn’t correspond to doubling the bitrate as the amount of temporal redundancy increases and that can be efficiently exploited by video codecs such as the ones standardised by ITU-T and ISO/IEC MPEG.

Another aspect to be considered in the deployment of HFR television is the possibility to serve non HFR and HFR receivers with the same signal. This can be easily accommodated by exploiting the temporal scalability feature offered by video coding standards such as H.264/AVC and the state-of-the-art H.265/HEVC. These standards allow packets associated with certain frames to be coded in such a way that some temporal dependencies are avoided. One example is constituted by a bitstream which can be decoded by 50 fps and 100 fps receivers. The bitstream will contain information so that a 50 Hz decoder can discard the packets associated to every other frame and still be able to reconstruct the compressed video.

Finally, it is also worth mentioning that currently all standard definition TV signals are distributed at 25 fps and UHDTV signals up to 50fps regardless of the fact that a TV set may claim up to 100 fps or higher. In this case the extra frames are generated by the TV using motion interpolation, which does not correspond to having a native high frame rate signal.